Why Do Crappie Turn Black? Is it Only Males?

The reason why white crappie turn black and black crappie get darker has to do with spawning, or in other words, this color change happens at the beginning of the spawning season, right when males become ready to spawn. As to why they turn black, although it is not 100% known, it is thought to be a signal to the females that they are ready to spawn. 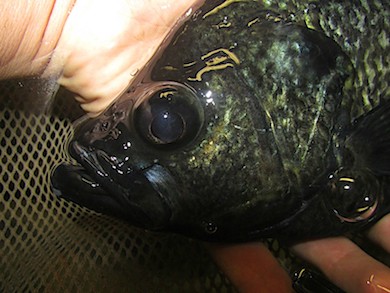 Crappie, both white and black, change color when they are ready to spawn. Male white crappie develop dark spots or may even fully turn black (or at least darken significantly), and male black crappies can become coal black.

Many people refer to this process of crappie darkening as putting on their tuxedos.

One thing that is important to note is that males take on the dominant role when it comes to preparing an area for the female to lay her eggs, an area that is suitable for the eggs, which is referred to as building a nest.

While the male crappie are preparing the nests, the days get longer, the sun gets brighter, temperatures increase, and the hormones change as well.

So, what needs to be said is exactly why crappie turn black is not a scientifically proven fact, but it is thought caused by a hormonal change that signals that the male is ready to spawn, thus signalling the female to lay her eggs.

Whether this color change in the males is simply due to hormonal changes, or if it is an actual (albeit unconscious) sign for the females that it is time to lay eggs. To be both fair and realistic, chances are that it is a bit of both.

Are Black Crappie All Males?

Ok, so as we have made clear, there are both white and black crappie out there, and yes, they are two different fish.

Therefore, no, not all black crappie are males. As nature goes, it’s about a 50/50 split (roughly), with half being males and half being females.

The female white crappie does not turn black during the spawning season. It stays white.

How Big Do Black Crappie Get?

Depending on where you fish, the biggest black crappies around will usually be between 30 and 35 cm or between 12 and 14 inches, with the larger specimen possibly coming in at around 16 inches (finding one this big is very rare).

The biggest black crappie usually top out at around 3 to 4 pounds, but ones as large as 5.5 pounds have been caught (the world record is 5.46 pounds to be exact).

Keep in mind that it will take a black crappie around 8 years to grow to 30 cm or 12 inches in length.

Although there may be some minute differences depending on the location, white crappie do usually start spawning before black crappie.

That two Fahrenheit difference is not much, and in some cases, the water may jump from the mid-fifties to the low sixties in just a couple of days, which would effectively mean that black and white crappie spawn at roughly the same times.

With that being said, there is some evidence that in some places, especially further south, such as in Tennessee, there are some areas where locals say that black crappie spawn first.

So, while white crappie technically do spawn first according to temperature, this does not appear to be a steadfast rule.

What we want to do now is to take a quick look at the main differences between the spawning of white and black crappie.

Honestly, this won’t be too long, because the differences are pretty minor and limited;

So, crappie turn black when it is spawning season, and although there are black and white crappies in terms of species, for both of them, the males will turn darker in color when they are ready to spawn.