Why Do Crappie Get Slimy?

When it comes down to it, the crappie is one of the tastiest freshwater fish that you can catch and eat, and even better, there is an abundance of them in many areas in North America. That being said, you might have noticed one striking problem with crappie when you are catching and cleaning them, slime. So, why do crappie get slimy?

Crappie do not get slimy, they are always slimy. The reason why crappie feel slimy to touch and very slippery, is because these fish create their own slime coat as defense mechanism which helps add a layer of protection against bacteria, diseases, viruses, and pathogens. 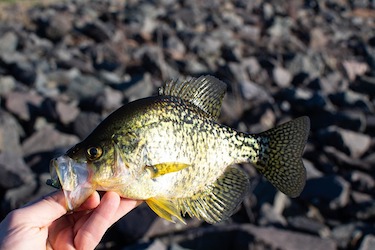 So why Are Crappie So Slimy?

So, you put a few crappie in the livewell on your boat, you open it up, and now you have a livewell full of slime.

Why does this happen? As mentioned above, all of that slime on a crappie is a defense mechanism that the fish uses to protect itself from outside threats, which in this case are various diseases, viruses, bacteria, pathogens, and other such things.

Simply put, crappie automatically creates this layer of slime all over their scales, from head to tail.

Make no mistake about it, because this is a never-ending process that always occurs, not just a knee-jerk response like an octopus spraying ink to make a speedy getaway.

That layer of slime that crappies have keeps bacteria and other microscopic invaders from getting under the scales, into open wounds, and into the fish’s body.

That slime coating is like an added layer of immunity, an integral part of the crappie’s immune system.

What’s The Best Way To Get The Slime Off Your Hands?

Although the slime that will inevitably get on your hands when fishing for and cleaning crappie is quite smelly and feels pretty nasty, it’s really not all that hard to clean off.

There are many different methods for getting that slime off your hands, and none of them are very difficult. Refer to the list below for various crappie slime removal methods.

How Do You Remove Slime From Crappie Fillets?

Ok, so we have figured out how to remove that yucky slime from your hands, but those crappie fillets will still have slime on them as you cleaning them.

You obviously don’t want to be grilling up that slime, because that’s just a whole new level of gross. So, how do you remove the slime from crappie fillets?

First off, if you have not yet scaled and skinned the crappie, a good thing to do is to use the back end of a knife to scrape the slime away right along with the scales.

This should remove that thick outer coating of slime. However, the fillets themselves may still excrete some more, and you probably won’t be able to scrape it all off anyway.

Once you have scaled and skinned your fish, and cut it into fillets, you can then give it a quick rinse under warm water. This should remove any remaining slime.

Pro tip, if you aren’t eating the crappie immediately after right after rinsing it, put it on ice. The colder temperatures will help prevent the crappie filets from becoming slimy again.

How Long Can You Wait To Clean Crappie?

Generally speaking, the sooner the better. The longer you leave any fish dead without cleaning it is time that bacteria and other pathogens can use to take hold.

For the most part, it is best to clean any fish within two hours after catching it.

That said, if you are careful and you keep the fish on ice, you may wait for up to 24 hours to clean it.

As you can see, although that slime may look and feel a bit icky, the bottom line is that the only purpose it serves is to protect the fish, and moreover, it’s easy enough to clean off. Seeing as crappie are so darn tasty, we definitely think that dealing with a bit of slime is worth it.