Why Do Catfish Croak And Grunt?

In case you have never seen it before, or should we say if you had never heard it before, catfish do make strange sounds. So why do catfish croak and grunt?

Catfish make croaking and grunting sounds as a defense mechanism. This sound is thought to be a way to scare off potential predators, much like the bark of a dog. Catfish do also croak when they are feeling stressed, particularly when they are in danger of being eaten, which is why when you catch a catfish on your line, as you haul it onto your boat, you are likely to hear it croak. 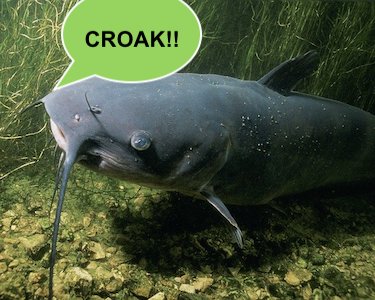 So, Why Do Catfish Make Sounds?

Generally speaking, there is one main reason why catfish make these grunting, barking, or croaking sounds, and it’s to do with self defense.

On a side note, the duration, volume, and exact sound that a catfish makes generally depends on the species of catfish as well as its size.

Obviously, a bigger catfish will be able to make louder sounds, with the bigger catfish often sounding like they are barking, much like an actual dog.

The main reason why catfish make these croaking sounds is to help ward away potential predators. It’s really no different than the dog barking. It’s a whole lot of noise designed to scare away potential threats.

Moreover, when a catfish croaks, it generally occurs at the same time as the raising of the spines on its back. Of course, the spines on the back of a catfish are very hard, sharp and yes obviously designed for self defense.

Therefore, if a catfish feels threatened in any way, it will raise its spines and make these croaking noises in order to keep itself safe.

With that being said, these croaking noises may also occur as a catfish swims, particularly a channel catfish (the reason why this occurs is simply due to the forward motion of the fins while swimming).

Moreover, it is also said that some catfish may croak simply because they feel like it. Yeah, sometimes we all just like to make a bit of noise.

How Long Do Catfish Croak For?

Exactly how long a catfish croaks for depends on how long it perceives a threat.

Generally speaking, a catfish will continue croaking for as long as it perceives a threat for which could be a few seconds, a few minutes or a few hours.

As long as a catfish feels threatened, it is likely that it will continue croaking or barking. now with that being said, as we have noted above, the frequency, duration, pattern, and volume can vary from one catfish to another, and it can also depend on the exact situation.

There is no real definition or determination in terms of how long this croaking lasts. It really depends on the fish and the given situation at hand.

How Do Catfish Make A Croaking Noise?

What you were probably wondering is exactly how catfish make this croaking noise, and no, it’s not like a dog barking, or in other words, they do not use their mouths or vocal cords to do so.

This croaking sound is actually produced much in the same way as a cricket makes that chirping or buzzing sound (crickets rub their legs together really quickly).

To be specific, this croaking sound is produced when a catfish quickly moves its fin forward.

The ridges that are located at the base of the spine make contact with a bone called the cleithrum.

Simply put, catfish move their pectoral fins back and forth very quickly, which causes two very hard and bony areas to rub against each other, thus making this croaking noise.

When Do Catfish Croak?

One thing that is important to note is that there is never no reason for a catfish croaking. Although a catfish may just feel like croaking, this is generally not why they do it.

First and foremost, this croaking occurs as a defense mechanism as a way to warn predators to back off. As we said before, it’s really no different than a barking dog.

A croaking catfish is one that is perceiving a threat, is in distress, or is in the middle of being attacked.

The bottom line is that if you hear a croaking or barking sound coming from a catfish, it is totally normal, and probably just means that it feels threatened. It can be really odd to hear, but pretty cool too!