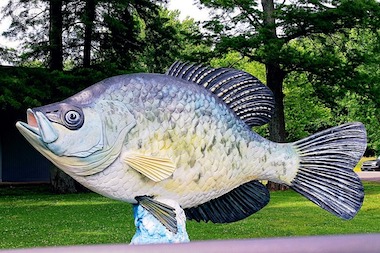 What Time Of Year Do Crappie Spawn: Answered

In case you did not know, spawning means that the fish are mating, where the females lay eggs, and the males then fertilize them. Well, this is also when crappie are the most aggressive, active, and yes, super hungry too. Spawning season for crappie is when you have the best chances of catching a lot of these fish.

So what time of the year do Crappie spawn? Generally speaking, crappie spawn in the spring, when temperatures start to heat up, but this does also depend on the place and climate.

Well, to provide you with a concise answer in terms of the crappie spawning season, it is in the spring time, specifically when the water starts to heat up.

You do need to leave a bit of leeway here, as it all depends on the specific climate and temperatures for that year.

Crappie are usually very dormant and inactive during the winter, mainly because it is cold, their metabolism slows down, and they are more or less just focused on basic survival.

However, when temperatures start to rise, crappies will become way more active. When springtime hits, for one, there are more bugs, insects, and tadpoles to eat, not to mention that this is when crappie spawn.

You see, crappie could never spawn during the cold winter months, as the fish eggs would simply not survive the cold.

When it comes down to it, when the water reaches about 50 degrees, or anywhere between 50 and 62 degrees, is when crappie start to spawn.

The 2 Different Types Of Crappie

Now, what you also need to know here is that there are 2 types of crappie, these being black and white crappie.

Black crappie will usually start the spawning season a couple of weeks before white crappie, as they can handle slightly colder waters.

If the water temperature is upwards of 50 degrees, chances are that black crappie have begun spawning.

When it comes to white crappie, the water needs to be upwards of 56 degrees.

This means that by the time white crappie start spawning, black crappie are most likely already done spawning for the year.

A Note On Climate

For instance, crappie can be found in Canada, where temperatures are usually pretty cold late into the season. In Canada, especially Northern Canada, spring season where waters get above 50 degrees may not come around until April, or in some places even May.

However, if you live further down south, such as in the southern States of the Unites States, the water will begin to heat up much earlier, around the beginning of March.

Some places, where the water never gets too cold, you might even see crappie spawning during the time of year which we would usually call winter.

Therefore, as you can see, asking which time of year crappie spawn is not so black and white, as it really does depend on water temperatures more than anything else.

Where To Find Crappie During Spawning Season

So, now that it is spring time and you know that the water is warm enough for the crappie to be spawning, you still need to find the right locations to catch them.

When it comes to North America, whether Canada, the USA, or even Mexico to a certain extent, crappie can be found in most freshwater bodies of water.

Now, they do like calmer waters more, so they are usually found in river basins, reservoirs, and lakes, but can from time to time also be found in moving waters such as deep streams and rivers.

So, if you want to catch crappie, you are best off finding a good fishing lake near where you reside.

What is also important to note is that crappie, while they are spawning, usually like to find cover and they like shallow water.

So, if you are fishing a big lake that gets deep near the center, during spawning season, to catch crappie, you want to stay closer to the shore where it is shallower.

Related: is it Legal to buy/sell Crappie Fish?

Seeing as crappie love to find cover to protect their eggs, you also want to fish where there is a lot of underwater vegetation. They will lay their eggs under or near plants, rocks, wood, and other structures.

They might move to slightly deeper waters around high noon, as the water can get a bit too warm for them if the sun is pounding down. However, you are best off fishing in the shallows, where there is cover, and doing so in the early morning or in the evening.

One important aspect of the crappie spawning season you need to know about is why the fish, especially the males, become so aggressive.

The point here is that crappie, especially the males, become do aggressive towards baits and lures because they are trying to protect the eggs and the females are not actually biting lures and hooks due to being hungry, but because of a paternal instinct to keep their offspring safe.

What does this mean for you and your fishing gear? It means that you need to use gear that will provide for a super fast hook set.

A male may only bite the lure once or twice with the aim of killing it, and then swim off, so if you are using a hook, line, reel, or rod with a slow hook set, chances are that the crappie are going to get away. You need to be able to hook into their mouths at the first sign of a nibble.

So, this means having a reel with a fast retrieval rate. The harder you can crank on the reel, and the faster it pulls the line in, the faster your hook set will be.

In terms of the rod, you want to use a fast action rod. The faster the action, the more responsive the line and hook will be to your movements, therefore also allowing for a fast hook set.

Seeing as spawning crappie like to be in cover, make sure to use lures that aren’t going to get tangled up in the weeds, as that is where you will find these fish.

Finally, be sure to use a good fishing technique such as vertical jigging, something that will really grab the attention of crappie, but not scare them off.

It is definitely recommended that you use smaller baits and lures here, as spawning crappie are very skittish, and anything too large, or if your lure makes a big splash, the crappie will scatter, and the chances of catching one will decrease drastically.

If you need some float/bobber suggestions, here is our top 5.

So, if you want to catch crappie, just keep in mind that the spring season, when they are spawning, is the best time to do so. Any water temperature over 50 degrees should signal the start of their spawning season.

Remember to stay in the shallows and use gear that is ideal for quick hook sets and working around structures. If you follow these tips, you should have no problems catching a whole lot of crappie during their spawning season.

Related: How fast do crappie reproduce.