How To Make A Worm Farm For Fishing: 6 Steps

If you are an avid angler, you probably know that live worms make for some of the best bait out there. Virtually every species you could fish for is going to go for that worm on the hook.

However, constantly buying worms can really hurt your wallet, and you don’t always want to have to stop at a bait shop either.

For this reason, people who are really serious about fishing, especially with live bait, and for people who like to spend more time fishing than they do anything else, making a worm farm might be a good option.

Worm farms are actually quite common, they are useful for more than just creating an endless supply of fishing bait, and it can be fun to do as well.

Here is everything you need to know on how to make a worm farm for fishing, the right way.

What Is A Worm Farm?

Yes, you heard right, here we are talking about a worm farm. A worm farm is a collective community of worms.

Now, these are usually established as means of composting and recycling food and other organic wastes with the aim of creating nutrient rich fertilizer and compost for gardening needs.

However, worm farms can also be used for the purpose of fishing. Yes, all of that food makes for the perfect worm breeding ground, and not only do worms help create some truly awesome compost for gardening, but they also make for great fishing bait too.

Therefore, while a worm farm is technically meant for composting, you can also use those same worms for fishing bait.

It’s a cool 2 in 1 kind of thing, a great way to recycle old food while also creating an endless supply of live fishing bait.

How do I Make a Worm Farm for Fishing?

Before you can get started with making a worm farm for an endless supply of top quality fishing bait, there are a few things you will need to get.

What Materials Do You Need To Make A Worm Farm?

Here are all of the things you will need to make your very own worm farm;

Now that you have gathered all of the items you will need to make your DIY worm farm for fishing, let’s go over a step by step process on how to set it up for the best results.

The first thing you need to do is to prepare the first bin for use. Keep in mind that one bin is going to go inside of the other here.

Use a pencil or pen to mark around 24 holes, small and evenly spaced holes. You will then use the drill to drill each of these holes.

The point of this is to allow water to drain out of the first bin, so that the worms don’t drown.

You also want to drill roughly 40 holes in the sides of this bin, around 10 holes on each side, as well as another 20 holes on the lid.

The point of this is to allow for optimum airflow. Be sure to do only do this to the first bin. The second bin stays unaltered.

Now, take the second bin, the unaltered one, and take a brick, cinderblock, a flowerpot, or anything else of the sort and place it in the middle of this bin, inside of it.

You will then put the second bin, the one you drilled all of the holes in, on top of this.

The next step in making your DIY worm farm for fishing is to prepare the bedding.

Take a bunch of newspaper and shred it into long and thin pieces, enough to fill up about one third or one half of the bin.

Keep the newspaper fairly loose. Don’t compact it together or squeeze it down.

Now you are going to take some water and soak that newspaper. Don’t get it to the point where you have a little lake going on, but the newspaper should be very wet and spongy.

This will serve as bedding for the worms, as well as a source of moisture too. Don’t worry, newspaper does decompose, so this is just fine.

Now you need to add the worm food, or in other words, the table scraps. All sorts of bread, fruits, and vegetables will do just fine.

Just remember that grease, meat, and bones are not ideal for this sort of thing.

Worms will grow and reproduce best when fed veggies and fruits, plus this will also help make the best compost possible for your garden.

Also, try not to add too many acidic things like coffee grounds and citrus, although a little bit is fine.

The next step here is to add the worms into the bin with all of the food scraps.

We would recommend starting with at least one dozen worms, but the more the merrier.

That said, if you have time to wait, you don’t have to add too many worms, as they will reproduce fairly quickly.

The final step here is to cover it up. Take some flat sheets of newspaper, wrap them around the bedding from the top, and then put the lid on.

Types of Worms for Fishing 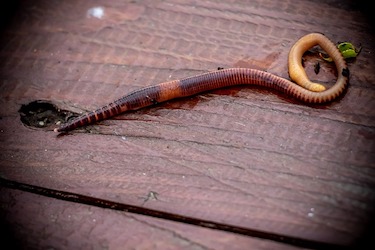 As we mentioned above, there are a variety of worms that can be used for fishing. Which one you go for depends on what your needs are and what kind of fishing you are aiming to catch with them.

These are very brightly colored worms which attract the attention of all fish nearby. Not only are they eye catching due to their color, but also because they wiggle.

They are called wigglers because they are very active, they move a lot, and they wiggle like no tomorrow, this catching the eyes of fish far and wide.

However, a problem with red wigglers is that they may excrete a pungent liquid when they are threatened, which can scare fish off due to the bad smell.

That said, many people see great success when fishing with red wigglers.

This is the most commonly sold and used bait worm in the USA and in Canada, with one main reason for this being that they are very common worms that can be found anywhere, they can survive in many conditions, they reproduce fast, and they are inexpensive too.

These are the largest of bait worms out there, something that helps attract the attention of fish, and when they are freshly farmed, they are very active and wiggly, something that also helps catch the eyes of fish far and wide.

However, farming Canadian nightcrawlers is not very easy.

If you happen to live in Australia, it’s the African nightcrawler which you are probably most familiar with in terms of live bait.

This is the most widely used bait worm in Australia. These are about as long as the Canadian version, but not quite as thick.

Moreover, they have somewhat thinner skin, making them easier to get on and off hooks.

That being said, these worms are sensitive to cold temperatures and other climate factors, making them somewhat difficult to farm.

However, these are fairly large and active worms, making them great fishing bait. Beware that you cannot use these worms to fish saltwater.

This worm is quite similar to the red wiggler. They have about the same color, not quite as red, but close. They do grow a good bit larger than red wigglers too.

These worms are very tough and they are not susceptible to extreme temperatures, they are very easy to farm, they are brightly colored, and they are super active on the hook too.

They’re about as thick as a Canadian nightcrawler, but not quite as long.

When it comes down to it, the European nightcrawler is one of the easiest worms to raise, it reproduces fast, it’s great at quick composting, and it catches fish like none other.

What Are The Best Worms For Fishing?

Most people would agree that European nightcrawlers are by far the best option to go with.

Now, when it comes to North America, they are not as easy to find and they are pricier to buy too.

However, when it comes to ease of keeping them alive, reproductive rate, composting efficiency, and the ability to attract and catch fish, the European nightcrawler is seen as the best.

Second to the European nightcrawlers is usually the Canadian nightcrawler, particular because they are cheap and easy to find, yet make for pretty good fishing results.

How Long Does It Take For Nightcrawlers To Reproduce?

If you start with a decent population of worms, at least a dozen, it should take no longer than 2 months or 60 days for the worms to produce offspring.

In your worm farm, the worms should easily find a mate and then produce a cocoon. Each nightcrawler cocoon will produce around 4 baby worms on average.

When you farm worms, depending on the conditions, you can expect the population to double every 3 to 6 months.

How To Fatten Up Worms For Fishing

One of the best ways to fatten up the worms in your worm farm, to use them as fishing bait, is to feed them worm superfood.

This is a fancy way of saying food that worms love to eat and contains a lot of nutrients which will make them fat and juicy.

Moreover, to get the worms really fat, provide them with more than enough food to eat, more than you usually would when just composting.

Also, although it is not proven, it is theorized that worms do grow as large as their living conditions allow.

Therefore, providing your worms with more space in the farm may also help them grow bigger. Finally, try to maintain constant temperatures too.

How Should I Store My Fishing Worms?

If your worm farm is getting full and you want to take some worms out and store them for your next fishing trip, here are 2 easy methods of doing so.

Can You Fish with Dead Worms?

Technically speaking, sure, you can fish with dead worms, but it just won’t work as well as a live worm.

Moreover, when worms start to decompose, they may release an odor which will do nothing to attract fish, but quite the opposite in fact.

Also, dead worms may can become very fragile and tear apart easily, thus making them hard to hook, plus fish may be able to pull them off of the hook too easily.

Making your own worm farm for an endless supply of live fishing bait is not overly hard.

Just follow the outlined steps, choose the right worms for your needs, and be patient.

Before you know it, you will have a huge and always multiplying supply of bait worms for fishing.