How Long Can You Keep A Fish On Ice? (Gutted & Ungutted)

When you go fishing and you actually catch something, you probably don’t want to head back to shore as soon as you have caught your first fish. This means that you need to put it on ice until you clean and properly store it. Ice only goes so far, so with that being said, how long can you keep a fish on ice?

If you have ungutted fish, you can keep it on ice for up to two days without it going bad. However, no more than one day is generally recommended. Moreover, if you have gutted yours fresh and keep the fish on ice inside of a fridge, it could stay good for up to five days. 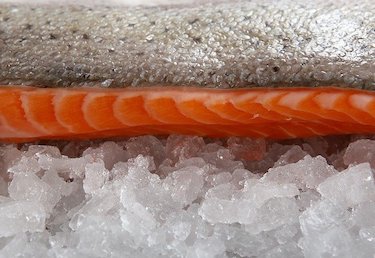 How Long Can You Keep Ungutted Fish on Ice?

As mentioned above, if you have not yet gutted your fish, you can keep it on ice for between one and two days before it starts to lose its flavor and go bad.

Remember that keeping a fish on ice is not the same as freezing it. Keeping fish on ice, while it will keep it cool and slow down the deterioration process, will not totally freeze it.

Sure, a frozen fish will last anywhere for a few weeks to a few months, but keeping it on ice is just not the same as being frozen.

Also, keep in mind that freezing a fish before gutting it is a huge no-no. Therefore, if you are going on a two-day fishing trip, you can put the fish that you caught on the first day inside of an ice filled cooler, and wait until the end of the second day of fishing to gut and clean all of your fish at once.

Do You Need to Gut a Fish Right Away?

The general rule of thumb here is that yes, when you catch a fish, you should bleed and gut it as soon as humanly possible, which is especially the case if you do not have ice.

If you do not have ice, you absolutely must bleed, gut, and clean fish right away. They will stay good for about 4 to 6 hours in the shade, without ice.

That said, if you do not have ice on your boat, the best bet is to keep the fish alive in a livewell until you get back to shore.

Once you are back at shore, yes, you can choose to put the fish on ice for up to two days (realistically less than two days), before gutting it, although once again, a gutted fish can last for up to five days on ice, whereas an ungutted fish won’t make it past two days.

Remember that those fish guts are full of bacteria that can quickly multiply and leach into the rest of the meat, so leaving an ungutted fish on ice for too long is not recommended.

Generally speaking, if you do not plan on gutting your freshly caught fish right away, then it is actually much better to keep them alive. Keeping your fish alive until you gut it will keep it as fresh as it can be.

How Long Can You Keep Fresh Fish Before Freezing? 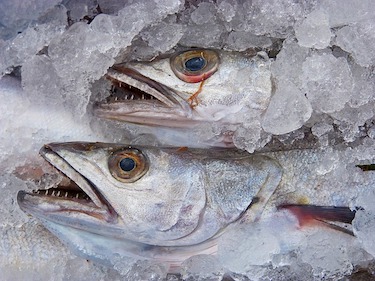 Once again, it is very important for you to note that there is of course a distinction between keeping a fish on ice and actually freezing it.

You can keep fish in the refrigerator or on ice for up to two days before deciding to freeze it.

However, once again two days it’s really pushing the limits, and realistically speaking, one day is as long as you want to push this too.

On a side note, you could also keep fish and shellfish in the fridge for up to two days before cooking it.

Also keep in mind that cooked fish and seafood can stay there for up to three or four days at most in the fridge, and once it has been cooked

Finally, also keep in mind that if you freeze fish or seafood, it will stay good more or less indefinitely.

However, with that being said, after a few weeks in the freezer, fish and shellfish will start to lose their flavor, or at least the flavor can change.

How Do You Preserve Fish With Ice?

Once again, keep in mind that you can only do this for up to two days, but with that being said, preserving fish with ice is very easy.

First and foremost, you should of course clean your fish. This means that you need to remove the guts and the other interior organs.

If you really want, you can also remove the scales of the fish at this point, although it is not necessary.

Just keep in mind that if you do get your fish, it will stay good for much longer than if you don’t get it up to twice as long, if not longer.

If you do not gut your fish, the only thing that you can really do to preserve it with ice is to put it on a thick bed of ice and then cover it with more ice.

However, if you are smart enough to get your fish before putting it on ice, you can also fill the inside of the fish, that open cavity where you remove the guts from, with more ice.

The fact that there is more ice surrounding and inside of the fish will keep it cold for longer, and therefore it will stay good for longer. Moreover, the removal of the guts will help preserve the fish even further.

How To Humanely Kill Fish?

Generally speaking, the best method to humanely kill a fish is to first stun it and then bleed it.

Fish should be stunned, which means that it won’t really know what’s going on as it is being bled out.

This is the most humane way to kill a fish that you plan on eating. Keep in mind that in order to reduce stress and to keep it as humane as possible, the fish should remain in the water right up until they are stunned and killed.

Now, there are two methods of stunning fish that you can use, with one being percussive stunning and the other being spiking.

Percussive stunning involves using a very big and blunt object to hit the fish right between the eyes.

Yes, here you are more or less knocking a fish out. That said, if you hit the fish hard enough, it will probably kill it outright (although you will still want to bleed it just to be safe).

The other humane method of stunning and killing fish is by spiking. As you can probably tell, this involves shoving a very sharp object very quickly into the brain of the fish.

Now, most places will tell you that the spike impact well caused the fish to become unconscious, at which point you can bleed in.

However, let’s be realistic, when a spike gets shoved through your brain, you die. To ensure that the fish dies as quickly as possible, move from side to side to completely destroy the brain of the fish.

**If you are planning to be as humane as possible, you do need to be aware of the fact that both would be stunning methods, although they may kill the fish outright, will not always do so. Do not let a fish die a slow and painful death via a blow or spike to the brain. If the fish does not die from the initial blow or spike, you need to bleed it out.**

On a side note, if you happen to be a caveman or a lumberjack, and you just happen to have a hatchet or machete on you, then a really quick and humane way to kill a fish is to simply chop its head clean off. Decapitation is definitely a quick death.

Is it Ok to Put Fish on Ice Before Cleaning?

Yes, technically speaking it is totally OK to put fish on ice before cleaning, but just remember what we have said several times now, which is that if your fish is not cleaned, it is only going to last for one or two days, whereas if it is cleaned, it’s going to last for four or five days on ice.

How do You Store Fresh Caught Fish?

The best way to store freshly caught fish if you are still on your boat, is to put it in a livewell.

You can then clean and gut it onshore, put it on ice and keep it in your fridge.

Even if you clean and got the fish on the boat, as long as you keep it on ice it should last for up to five days. Yes, here being on ice is about the same as being in the fridge.

Now, if you were planning on storing your fish over the long term, you do need to freeze it, in which case you should clean and gut it immediately and get it into the freezer as soon as possible.

Do not leave the fish on ice or in the fridge for more than one or two days at the very most before freezing.

Put the fish in a zip lock bag. Get as much air out of the bag as possible and freeze it. Fish will last nearly indefinitely when frozen.

Does Freezing Fish Change the Taste?

Although freezing for just a couple of days or weeks should not do much in terms of changing the Clover or case of the fish any longer than that, and the taste will start to deteriorate.

Exactly what happens to the taste of the fish when frozen for too long does depend on the exact fish, but generally speaking you can expect the fish can produce a somewhat odd flavor, and the flavor may also just be reduced.

How Can You Tell if Fish is Spoiled?

There are a few telltale ways to know if a fish has gone bad. Yes, fish are a bit slimy and smelly by nature, but one fish meat goes bad.

It becomes just that much slimier and smellier. Fresh fish fillets should listen and sparkle just like they came out of the water.

Old and bad fish will become dull, super slimy, and very stinky. In all reality, it is almost impossible to not be able to tell when fish has gone bad.

There you have it people. You should now know everything there is to know about cleaning and gutting fish in relation to storage. Just remember that fish is delicate, so you need to work fast, be concise, and be careful.