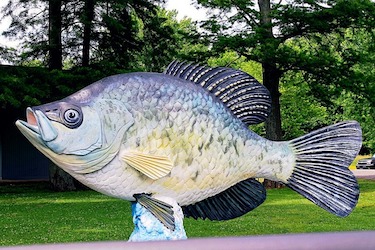 How Fast Do Crappie Reproduce?

One of the things that so many people worry about is how fast fish reproduce. After all, us anglers love catching fish, and even eating them too, but of course, we don’t want to overfish any given area. For those of us who have our own ponds, overcrowding can be an issue too. So, how fast do crappie reproduce?

Crappie reproduction is quite slow at first, because it takes crappie up to three years to become sexually mature. At this point, a female can lay anywhere from 5,000 to 10,000 eggs per year, and yes, this is usually always once per year, during the spring mating season. 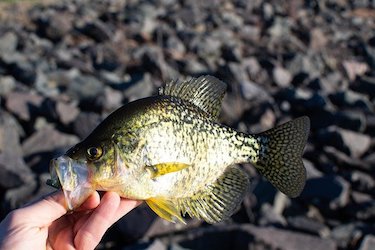 How Do Crappie Reproduce? How Fast?

Crappie reproduction in theory is quite simple. To be clear, crappie are not livebearers, which means that they do not give birth to live fish.

Instead, they are known for being part of a type of animal known as oviparous, or in simpler terms, egg layers. Yes, crappie lay eggs, which the male then spawns with his sperm.

Spawning happens in the late spring and early summer, generally from early or mid may to mid or late June. As the water becomes warmer, the males will move from the deeper waters to the shallower areas, usually to areas that are no deeper than two feet, and will begin preparing spawning beds.

This generally occurs when the water temperature reaches 50 degrees Fahrenheit or about 10 degrees Celsius. The males will seek locations that have hard bottoms and a good deal of cover surrounding the area.

They will fan out a little depression on the bottom, or in other words, a little bed. Once the waters reach around 68 degrees Fahrenheit or close to 20 degrees Celsius, female crappie will then move to the spawning beds and begin laying their eggs.

Crappie fish do have a fairly complex mating ritual, which means that a group of males will compete and fight for the right to fertilize the eggs of a certain female fish.

Once fertilized, these eggs can take anywhere from 2 to 5 days to hatch, but closer to 2 or 3 days is the norm.

In terms of how long spawning lasts, a female crappie can continue laying eggs from anywhere from a few days to two weeks, although around one week is usually how long a single female will lay eggs for, and have males fertilize them.

As mentioned previously, crappie don’t reach sexual maturity until they are about 2 to 3 years of age, and as you are about to find out below, they don’t necessarily all spawn every year, which means that reproduction speed, while it is not slow, is definitely not as fast as with some other fish types, particularly something like a bass that has a full spawn every single year.

How Many Times A Year Do Crappie Spawn?

Generally speaking, crappie spawn only once per year. They spawn once per year, and this happens during the regular spawning season, which occurs in the mid to late spring and early to mid summer.

Crappie generally do not spawn more than this. In fact, what is important to note with crappie, especially in terms of reproduction speed, is that they don’t necessarily reproduce or spawn every single year.

For the most part, crappie fish will have a very heavy spawn every three or usually every four years.

However, during those other years, they may just have a very light spawn or sometimes not spawn at all. Therefore, as you can see, unlike bass, which have full spawns every single year, crappie are relatively slow in terms of reproduction.

Can Crappie Spawn Twice A Year?

In terms of the spawning season, there is only one of these each year, so technically speaking, crappie fish do only spawn once per year.

However, with that being said, if you want to split hairs, a female crappie does not lay all of its eggs at a single time.

As noted above, spawning for a single crappie fish can last anywhere from a few days to two weeks, and generally speaking, a female crappie will divide its egg laying into three or four separate loads.

However, this all takes place over the course of those one or two weeks. So, there is only one spawning season that usually lasts about a week (for individual fish), but eggs are usually laid in several loads, not all at once.

How Long Does It Take For Crappie To Grow?

What you also need to know here is that crappie don’t grow all that fast, and it usually takes anywhere from 2 to 4 years for these fish to reach full size.

Now, do keep in mind that exactly how fast a crappie grows does depend on the exact type. For instance, black crappie tend to be the biggest ones, generally topping out at around 19 inches, and these can take up to 4 years, or sometimes even 5 years to reach full size.

Depending on the exact species, feeding, and water conditions, a crappie may grow anywhere from 1 to 3 inches per year.

How fast a crappie grows, and how large a single crappie will get depends on a variety of factors, determining exactly how old a fish of a certain size is, is not easy.

A good estimate is;

Of course, at a certain point, crappie will stop growing, so determining the age of a crappie based on its size really stops working once they reach a certain size. If a crappie is 16 inches long, it could be a 5 year old that grew fast, or could just be an old fish too.

So, in the grand scheme of things, although crappie fish are no slouches in terms of reproduction, they also certainly do not do so at lighting speed, actually pretty slow as far as most fish are concerned, with full and heavy spawns usually only happening once every 3 or 4 years.