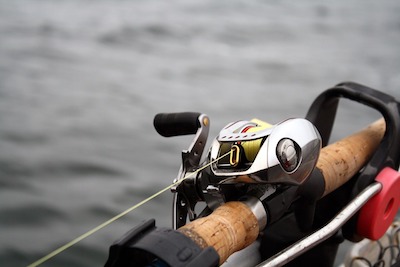 Today we are here to talking about how baitcasting reels work. We are going to do this mainly by talking about all of the features which they come with.

Reel Placement On The Rod

The reason for this is because of the way in which they are built.

As opposed to a spinning reel, which sits below the rod, the baitcasting reel sits above the rod.

This makes baitcasting reels a little harder to use, especially for children and beginners, or just for people who don’t have too much muscle to put to use.

The fact that the baitcasting reel sits on top of the rod messes with the balance a bit, and it makes the overall setup feel a little bit heavier, which can cause you to fatigue faster than with a spinning reel.

This can make things difficult, something which is not the case with spinning reels.

On a baitcasting reel, the line comes directly off the spool and sits in line with the rod, therefore making for a straight and direct entry and exit, whereas on a spinning reel the line sits horizontally in relation to the rod.

For this reason, baitcasting reels have the ability to cast much further than spinning reels, because the line sits in line with the rod, instead of horizontally to it.

Furthermore, this also usually means that retrieving your line is much faster than with baitcasting reels than with spinning reels.

You can checkout our top 5 line picks for baitcasting reels over at this post.

Another important feature of the baitcasting reel is the gear system. Yes, more or less all fishing reels come with a gear system, well, except for fly fishing reels, but those are very unique.

Anyway, the gears will dictate how fast you can retrieve the lure. A low gear ratio, which could be something like 2:1 or 3:1, can pull in maybe about 1-0 to 15 inches of line for every single time you turn the handle a full rotation.

The higher the gear ratio on your baitcasting reel is, the faster the line will come in.

A gear ratio of 7:1, depending on the reel, might be able to pull in a whole 30 inches of line for every rotation of the handle.

Keep in mind that smaller fish are usually best reeled in with a higher gear ratio due to a requirement for speed.

However, for bigger fish that require more patience and muscle, you are probably best off using a baitcasting reel with a lower gear ratio.

If you need some reel and rod combo suggestions, we have covered our top 10 picks here.

Not all baitcasting reels come with an anti-reverse system, but these sure do come in handy.

When a fish takes off in the other direction, it will pull line out. That much is usually unavoidable.

However, on fishing reels that don’t have an anti-reverse system, the handle will also spin backwards as the line gets pulled out.

This has caused ripped off finger nails, broken fingers, bruises, and severely smashed up knuckles.

An anti-reverse system lets the line pull out, but stoops the handle from spinning at breakneck speeds, thus saving your fingers from a whole lot of hurt.

The drag system is also a very important component of any baitcasting reel. The drag system regulates how much reverse pressure can be applied to the reel before the line starts coming off it.

In other words, if the drag system on your baitcasting reel is set to 15 pounds, a fish can apply 15 pounds of pressure in the opposite direction without the line coming off the spool.

If that fish applies more than 15 pounds of force, the line will come off the reel.

This is important to keep in mind, and it really all depends on how strong the fishing line which you are using is.

For instance, if your fishing line is 10 pound test, it means that it can handle 10 pounds of force before it snaps.

Therefore, to stop your line from snapping, if you have 10 pound line, you need to set the drag to 9 pounds.

Some baitcasting reels come with drag systems as low as 5 pounds and others with 50 or more. It really depends on what kind of fishing you plan to do.

The braking system is another important aspect of the baitcasting reel. This is something that can usually be adjusted. The higher you set the braking system, the more tension and friction it will cause in terms of spool rotation.

In other words, the braking system will dictate how fast the spool moves when casting, and how hard it is to retrieve the line when you are cranking on the lever.

If you don’t want to cast as far, or happen to be suffering from backlash, increase the brakes and tighten things up a bit.

Beginners should start out with higher brake level as it tends to make casting a bit easier.

Now, not all baitcasting reels have a level wind system, but it is pretty important, especially for beginners.

Without a level wind system, you need to use your thumb when reeling in the line in order to make sure that the line is evenly dispersed on the line.

If you don’t do this right, you will end up with a ton of fishing line on one side of the spool, and no line on the other side.

This can make a real mess and it makes any reel hard to use. A level wind system helps to ensure that the fishing line winds back onto the spool in an even manner.

The more tension you have on the spool, the slower the spool will move, and vice versa. Once again, if you are suffering from backlash with your baitcasting rod, it is recommended to up the tension a bit.

Beginners are best off with a higher tension level rather than lower.

This is something that can be adjusted using the tension knob located on baitcasting reels.

Baitcasting reels all come with a free spool feature, which is very important indeed.

This allows the reel to spin freely when casting without engaging the handle.

Simply put, this is required in order to cast a baitcasting rod.

Once you turn the handle, it will engage the gears and stop the spool from spinning.

The final thing to pay attention to with baitcasting reels is their line and line capacity.

A big feature of baitcasting rods is that they often have a much higher fishing line capacity when compared to other types of fishing reels.

This comes in handy for long casting, trolling, and other situations where you might need to let out a lot of line.

On that same note, most baitcasting reels are designed to handle heavy line, heavier than spinning reels at least.

They can handle lots of line, they can handle heavy line, and are just designed to heavier and more power intense fishing purposes.

Baitcasting reels are good for getting those big fish.

Casting With A Baitcasting Rod – Backlash

One major problem, really the only big problem, which baitcasting reels suffer from is backlash. Backlash is when the line coming off the spool is not tight, or in other words, it’s loose as it flies through the air.

For one, this can cause the fishing line to wrap around the tip of your pole. However, the real problem is the bird’s nest. When you cast your line and it is loose, and when you go to retrieve it, this backlash will cause a heck of a mess on your spool.

It can create what people call a bird’s nest, a mess of fishing line all tangled up, leaving you unable to cast or retrieve until you have solved the problem.

Some solutions to this issue of backlash with baitcasting reels include using heavier lures in comparison to lighter line, making sure the line is fed onto the reel properly in the first place, and tightening up the brake and tension so the line cannot case the spool to rotate as fast.

Now that we have talked about all of the dirty details regarding baitcasting reels,

Let’s just sum up their pros and cons so you know exactly what is going on here;

Baitcasting reels are ideal for a variety of fishing line, really all kinds of fishing line. They tend to have lots of line capacity, and they are designed to handle heavy test line, which means you can go for big fish with a baitcaster.

Baitcasting reels, due to their design, usually allow for much further casting distances that with other rods. This also goes for casting accuracy.

Baitcasting reels tend to be built very tough. They have a lot of power, they provide good leverage, and due to being able to handle heavy line, they are ideal for reeling in those big fish with a lot of weight behind them.

One big con of the baitcasting reel is the whole backlash issue we talked about earlier. Casting into the wind and not having good control of the line can cause this to occur. It’s really the only major issue with baitcasters, but it’s a pretty big one where beginner anglers are concerned.

Due to the weight of baitcasting reels, as well as their top placement on rods, they do mess with balance a bit and it makes your setup feel heavier. Simply put, this can cause some pretty bad fatigue in a limited amount of time, especially if you are not one for physical exercise.

As you can see, baitcasting reels might not be ideal for beginners, but they certainly do work quite well. Yes, there is a lot to consider when purchasing or using a baitcasting reel. Things like the gears, the brake system, the drag, spool tension, and all of those other features need to be considered.

They can be a bit hard to cast with if you don’t know what you are doing, but once you get the hang of it, baitcasters are probably one of the best kinds of fishing reels out there. They’ve got good accuracy, casting distance, and they are generally considered to be very versatile.