Can You Use Freshwater Reels In Saltwater?

When you go out to purchase a fishing reel, something that you need to pay attention to is whether it is rated for freshwater or saltwater. Sure, you might think that it’s all just water. What difference can make a bit of salt make right? So can you use freshwater reels in saltwater without anything bad happening?

Saltwater reels are specifically made with a corrosion-resistant material, usually stainless steel, and have sealed internal components so they will not get damaged by Saltwater. While you can try to regularly clean a freshwater reel after saltwater use, it will eventually get damaged, so it’s really not a good idea. 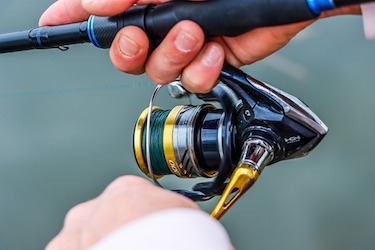 Let’s get right to it and figure out why you really don’t want to use a freshwater reel for saltwater fishing.

When it comes to freshwater and saltwater reels, there are five main differences that you need to know about, particularly in relation to why using a freshwater reel for saltwater fishing is not recommended.

These five main differences include the materials that they are built out of, their size and strength, their bearings, line capacity, and yes, the cost too, so let’s take a look.

This is of course because as far as corrosion resistance is concerned, stainless steel is one of the best types of metal out there, not to mention that it is also relatively affordable and very durable too.

Salt causes most types of metals to corrode very quickly, and when metal corrodes it loses its integrity and quite literally falls to pieces, which is of course something that you don’t want happening to your fishing reel.

Saltwater reels are made out of stainless steel, and this means that they won’t corrode due to that saltwater.

Freshwater reels will absolutely corrode and fall to pieces if constantly used for saltwater fishing.

Another main difference between freshwater and saltwater reels has to do with how big and strong they are.

Generally speaking, saltwater reels can be anywhere from 1.5 to three times the size of your regular freshwater fishing reel.

Saltwater fishing reels are designed to fight big fish so they in themselves also need to be big.

Now, in terms of overall durability, the simple reality is that because saltwater reels are built with stainless steel and generally with way more durable materials overall, they’re just much stronger and better able to handle the impact and rigors of fighting big fish.

They’re just much stronger and can handle a whole lot more punishment. If you use a freshwater reel to try and haul in a big saltwater fish, chances are that it could break on you.

Now, although some freshwater reels may have sealed ball bearings to keep the water out, not all of them do.

This is another major difference that you need to consider because with saltwater reels, all of the bearings in the internal components within the real are generally sealed off from the outside, so that absolutely no water can get in.

Another main difference that you will quickly discover between saltwater and freshwater reels is that saltwater reels have much larger spools that can handle way more line, up to three, four, or even five times the amount in some cases.

The reason for this is quite simple, and it is because when you go freshwater fishing, the waters are generally fairly shallow, and moreover, the fish are also smaller, so they aren’t going to fight you as much, which in turn means that you don’t need to have nearly as much line on your spool.

However, when you go saltwater fishing, the water is usually going to be quite deep, and this means that you need a long bit of line just to get to the fish in the first place.

Moreover, due to the increased size of saltwater fish when compared to saltwater freshwater fish, you’re also going to need more line to fight that fish and to tire it out until you can reel it back to the boat.

Due to their increased quality, size, and durability, they just cost more.

How Long Will A Freshwater Reel Last In Saltwater? 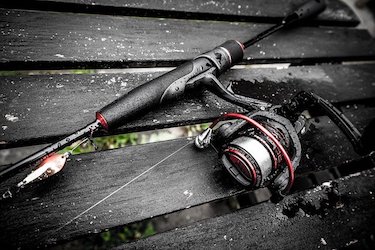 OK, so you might be thinking that you’re just going to risk using your freshwater reel for saltwater fishing, because, hey, what’s the worst that could happen?

Now, keeping in mind everything that we’ve discussed here today so far, it can be said that if you maintain your freshwater real and you clean it after every single trip to saltwater, it can last for a few years no problem.

However, we personally would not risk taking this gamble because doing so means that you do have to maintain that freshwater reel very well, which means cleaning it every single time.

Moreover, if you just have a really low-quality freshwater reel, even with good maintenance, it may still get ruined due to saltwater.

All of that said, if you use a freshwater reel for saltwater fishing and you don’t maintain or clean it at all, then it might not even last a single trip.

Using a freshwater reel for saltwater fishing for just a few hours may actually be enough to destroy a low-quality reel, so you should not risk it.

How To Clean A Fishing Reel After Saltwater Use

However, it is of course much more important for freshwater reels. Follow the steps as outlined below to clean your fishing reel from saltwater.

Can You Use A Freshwater Baitcaster In Saltwater?

OK, so technically speaking there is no real reason why you cannot use a freshwater baitcaster for saltwater fishing.

As long as you have the right kind of baitcaster, one that has plenty of line and is strong enough to handle big ocean fish, then it should all be fine.

Just remember that if the baitcaster in question is not made out of something like stainless steel or titanium, then it is going to corrode and rust over time, particularly if you don’t clean and maintain an after every single trip to the ocean.

If you plan on going saltwater fishing, then you may as well just get a saltwater baitcaster.

There you have it folks, all of the reasons why you really don’t want to use a freshwater reel for saltwater fishing. There is no denying the fact that getting saltwater fishing gear is quite the investment.

But with that being said, it is well worth the cost if you consider that a freshwater reel will not last nearly as long as a saltwater reel. Although it’s a much larger initial investment, over the long run, you will end up saving money. 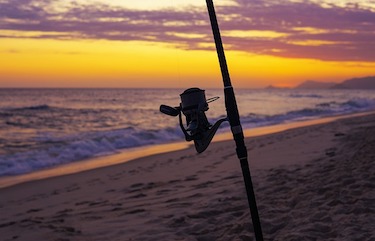 What Size Spinning Reel For Surf Fishing Is Best?

Disclosure: As an Amazon Associate I earn from qualifying purchases. more infoOne of the most important things to have when surf fishing is a good spinning reel. Now, you might be wondering what’s the best size of... 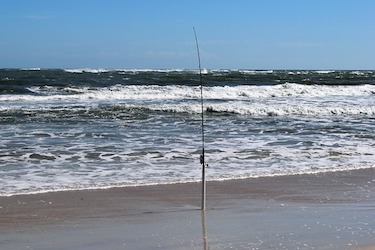 Disclosure: As an Amazon Associate I earn from qualifying purchases. more infoSomething that you might know is that using braided line for surf fishing can be very beneficial, especially due to its high level of...