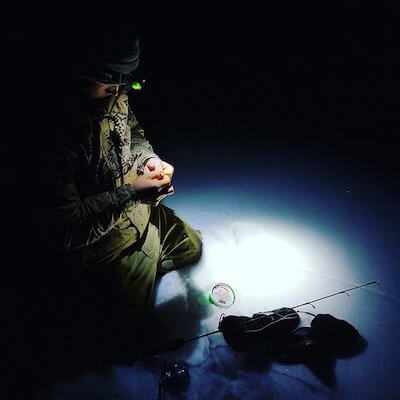 Best Time Of Day To Ice Fish: Morning Vs Evening

If you plan on going ice fishing, you have probably gathered all of your gear. Yes, your rod, the lures, the baits, and everything in between are all very important when it comes to catching the most fish. That said, your gear is not all that matters. The time of day you go ice fishing is going to make a difference. 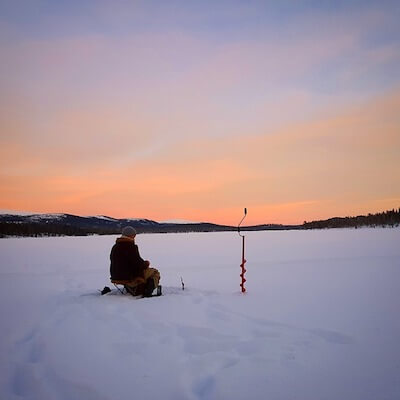 Does Time Of Day Matter For Ice Fishing?

Since we now know that ice fishing is best done right after sunrise, as well as for a couple of hours before and after sunset, it must mean that the middle of the day is not as good for ice fishing.

Yes, the time of day is going to make a difference here. Of course, this is not a random coincidence, and there are reasons why dawn and dusk tend to produce the best results.

Keep in mind that fishing, in general, is best done at these times, not just ice fishing, but that said, why is this the case?

It’s All About Food

The number one reason why just after sunrise, as well as before and after sunset, is best for ice fishing has to do with food.

Fish living under the ice eat a lot of small creatures like zooplankton and phytoplankton. Life under the ice is hard, so fish resort to eating these little things, mainly due to food scarcity.

Well, phytoplankton and zooplankton are most active at the twilight hours, and this means that if fish want a good breakfast and dinner, they need be on the hunt during these times.

Simply put, dawn and dusk are the times when fish eat, and therefore these are the best times to go ice fishing.

Yes, this also has to do with food, but it’s more than just because fish are hungry.

Another reason why dawn and dusk are the best times for ice fishing is because of the light you get at the twilight hours is perfect for a fish’s vision.

The twilight lighting provides fish with the perfect visual conditions to actually see their food, another reason why they are so active during these times.

A reason why ice fishing in the middle of the day is usually not the best choice is because of a fish’s natural instincts.

Fish hide from predators, which means that they tend to be more cautious during the bright hours of the day when it is easiest to be spotted by a larger predator.

Therefore, fish tend to be less active during the day, usually opting to go hide in cover to avoid becoming a predator’s dinner.

A Look at Specific Fish

Yes, so dawn and dusk are the best times to ice fish, but there is a bit of variation when it comes to different types of fish.

Let’s take a quick at the best time of day to ice fish depending on the species. 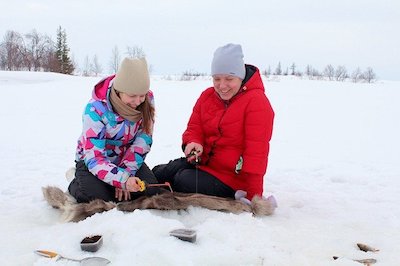 The time of day is not the only important factor to consider when choosing the best time to go ice fishing.

The time of the year is very important as well. First off, of course, ice fishing can only happen in the deep winter months when there is sustained cold weather.

This automatically means that depending on where you live, ice fishing is really only possible from November or December, sometimes even January, until late February, early March, and in some cases, the first couple weeks of April.

The main reason for this is because fish generally enter mating season towards the end of winter and in early spring.

Mating seasons means that fish are very active, they are hungry, and they often won’t notice that your hooks aren’t real food due to their focus on mating and eating.

Generally speaking, spawning and mating season is a great time to go fishing, whether ice fishing or regular fishing.

Of course, this does depend on the exact area and the species of fish in question, but the later February and early March rule usually holds true across the board.

Is It Legal To Ice Fish At Night?

Something you may be wondering is about nighttime ice fishing. Yes, this is fair, because many pro anglers agree that nighttime is a great time for ice fishing, particularly up until around midnight.

Although fish may not be able to see their prey too well during the dark hours, for whatever reason, they still tend to be quite active during this time.

Most professionals would tell you that if you have never tried nighttime ice fishing before, that you should definitely give it a shot.

The results will depend on the species of fish and the area, but people do seem to find a lot of success when ice fishing at night, particularly in the few hours after sunset.

In terms of legality, as far as we can tell, there are no laws or rules prohibiting people from ice fishing at night.

Now, this can depend on where you live, but as far as the USA and Canada are concerned, it is perfectly legal to ice fish at night.

That said, if you are worried, you can always do a quick Google search for your area.

Something we will touch on before we call it a day is nighttime ice fishing safety, which you always need to keep in mind because ice fishing is dangerous enough without it being pitch black.

What Baits Work Best For Day? 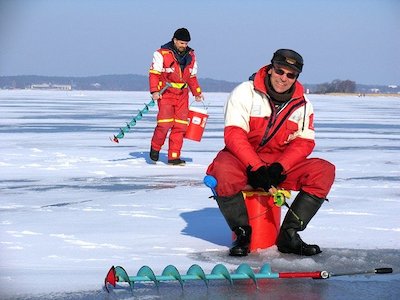 Something important here is of course what kind of bait you use to attract those fish, and yes, this will have to do with the type of fish you are aiming to catch.

Let’s go over some tips on choosing the best bait for daytime ice fishing.

During the winter, fish are used to eating small baits, anything they can find. So, if you are just using a hook, some of the best live baits you can use include various insects (mainly waxies, which are small worms), as well as small freshwater shrimp, and small baitfish such as minnows.

Size does matter here, and especially for fish like perch (a super popular and common fish to ice fish for), the smaller the presentation the better.

They aren’t used to getting big food in the winter, so if the presentation is too large, it may cause the fish to be overly cautious.

There are also a variety of artificial lures that you can use to ice fish. Just remember that you need to use the right lure according to the species of fish that you are going for.

Seeing as ice fishing involves fishing through one small hole, vertical jigging is one of the best ways and rigs to use for this purpose, especially for still water, because you can drop your bait in, let it sink, and then keep jigging it until something bites.

If the water under the ice has a bit of a current or movement to it, you might want to try some small swimbaits, some small lures that resemble baitfish, ones that will sink down a bit and won’t get stuck to the underside of the ice.

A horizontal jigging rig can work well for this too, something that you can slowly pull through the water as the current tries to carry it away.

Another tip here is to choose the color of your lure wisely. It can be pretty dark under the ice, so while your lure does need to imitate natural prey, it also needs to be bright and colorful enough for the fish to see it in those dark waters.

What Baits Work Best For Night?

Something that is not going to work well for ice fishing at night is dull, live bait. Fish aren’t used to seeing live baitfish at night, and even if they were, they probably couldn’t see them anyway.

The only real option for ice fishing at night is to use glowing or luminescent lures, such as a glowing in the dark crappie jig.

In terms of lure types, you can use the same types of lures as during the day, but they need to be bright, super reflective, and preferably luminescent.

Now, you can try using normal non-luminescent lures for nighttime ice fishing, but it won’t work as well, although if you use the flashlight technique, you might see some success with normal fishing lures.

The flashlight technique simply involves shining a flashlight into the water to create an illuminated area.

This will attract fish, it will let them see other creatures in the water they might like to eat, and it will attract them to your lure.

Is It Safe To Night Fish On A Frozen Lake?

Alright, so nighttime ice fishing can produce good results, but that said, there are probably safer things out there.

Here are some main points to consider about ice fishing during the night.

All of that said, if you are reasonable and you take all of the proper safety precautions possible, ice fishing at night is not much more dangerous than doing so during the day.

As you can see, if you want the best results when ice fishing, do so around dusk and dawn.

Of course, it does depend on the type of fish you are going for, but you can always aim to catch two or three types, that way, along with the right baits and lures, you can ice fish from dawn until dusk and halfway through the night too.

Just be sure to stay safe and never go ice fishing alone!