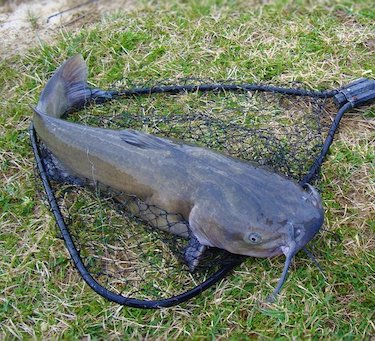 Generally speaking, the nighttime does produce more bites and catches than the daytime. Most people recommend starting catfish fishing just before sunset, about an hour before, with fishing remaining very good until sunrise, or just shortly after. That said, catfish are quite active during the day too.

Do Catfish Feed More At Night Or During The Day?

OK, so one thing that needs to be made very clear here is that there is a certain myth involved when it comes to catfish and their preferred feeding times.

The myth here is that catfish are far more active at night and will only eat at night. Folks, this is nothing more than a myth.

Catfish may very well be active at all hours of the night and the day, and this includes all catfish species, whether flatheads, channels, or blues. Catfish will eat whenever they get hungry, not just because it is dark.

Now, with that being said, there is of course the fact that the fish which catfish feed on tend to be more active during the night, particularly in the shallows.

Smaller fish that catfish eat will generally spend most of the day hiding in the deeper waters and around obstacles, which is why during the daytime, catfish are generally found in deeper waters with obstacles and cover.

However, once sunset approaches, those smaller fish tend to venture into the shallows for feeding.

Catfish will follow these smaller fish into the shallows around sunset, and will continue to feed on them until shortly after sunrise.

Moreover, because the smaller fish are in shallower water during the night, they are also easier for the catfish to catch.

So, while it is very true that the majority of catfish feeding occurs during the night, they will also eat during the day. Simply put, if a catfish is hungry, it will eat.

Yet, for your fishing purposes, if you want the best chances of catching catfish, doing so in shallow sections during the nighttime is probably your best bet, particularly if you use bait that closely mimics what the catfish would normally be eating during this time.

Do Catfish Feed in Patterns?

The answer to this question is not very straightforward, because realistically speaking, catfish are bottom feeders and scavengers, but will also hunt for smaller fish.

What this means is that because catfish are opportunistic eaters, they don’t really have set eating patterns.

Now, with that said, there are some noticeable differences in feeding patterns between juvenile and mature catfish.

Another aspect of catfish feeding patterns that you need to be aware of is that they do tend to feed more during the night than during the day, as they will follow smaller fish from the deeper parts of the water to the shallows.

In other words, catfish feeding patterns are somewhat determined by the movements of other smaller fish that the catfish will eat.

Remember, catfish are opportunistic eaters. The other thing that you need to keep in mind here is that during the winter, catfish tend to hibernate, which means that they eat very little, so angling for catfish during the winter is not your best bet for success.

What About Bank Fishing For Catfish?

In case you don’t know what bank fishing is, no worries, because we will explain this right now. The bank is just the shoreline, AKA, the water bank (where the water meets the shoreline).

One thing to look out for in this sense is whether or not the banks around the water are steep, particularly if there are any hills or mountains.

If there are hills or mountains, this is a strong indication that there may be fairly steep slopes under the water, or in other words, deep holes close to the shore.

If this is the case, you will probably find catfish located fairly deep within these holes, usually against the walls, which therefore makes casting an easy job, as you don’t have to go so far.

If this is the case, you are likely to find many catfish grouped closely together, this making it an ideal killing ground.

In terms of the time of day, yes, nighttime is the best way to go, as catfish will probably venture to the tops of these holes, although if you want to do daytime fishing in these holes, then using deep water lures that can sink down into the depths of the holes is recommended.

That said, the best time of day to do catfish bank fishing is from sunset to around midnight.

On the other hand, if the shoreline is relatively flat and has a very gradual slope, then night time is a great time for bank fishing too, as catfish will move into the shallows during the night time, all the way from sunset to sunrise, to feed on fish.

During the night, you should be able to find large populations of all sorts of catfish near the shoreline.

Keeping all of that in mind, angling for catfish from the shoreline during the day probably won’t go so well because catfish will venture into the deeper waters during the day.

However, if the bottom has a steep slope and the water gets very deep very quickly, then bank fishing during the day may produce moderate success, given that you use the right gear.

What Is The Best Month To Catch Catfish?

Generally speaking, the best time to catch any sort of fish is when they are spawning.

When fish are spawning, they are reproducing, and this means that they are very hungry due to all of the energy the expend for mating, and because they are so hungry, they are most likely to go for any bait that they see during this time.

Moreover, mating season also makes fish more aggressive, something else that makes them much more likely to bite.

So, we are not going to tell you that this or that month is best, because exactly when spawning occurs depends on the weather, mainly when it starts to get warm.

The further north you go, the longer winter lasts, and therefore, the later the mating season beings.

Generally speaking, late spring and early summer is when this occurs, which means that these are also the best times to fish for catfish.

Late April, May, and June are all ideal catfishing months. If you are far South, this spawning season could begin as early as early may, and if you are far north, the mating season may not begin until mid-May.

Let’s take a quick look at the most important facts that you need to know about catfishing during all four of the major yearly seasons.

If you want to do some winter catfishing, then you will want to do so during the daytime, from early morning until sunset.

Sure, they need to feed a little bit, but just enough to survive, so this is the time of year that they are least likely to bite.

If you do want to do winter fishing, then doing so right after a rainfall or snowfall is best, as these weather events usually cause temperatures to increase slightly, which could spur catfish to life.

During the early spring, if you live in a cold area, catfishing will be much like in the winter.

It is best to wait until all ice has thawed and temperatures start to increase, as this is when catfish will stop hibernating, and it also marks the start of the spawning season.

As temperatures get warmer, nighttime catfishing becomes much more successful. If it is warm out, go for catfish during the night.

If you plan on catfishing during the summer, if you want to do so during the daytime, you will need a boat so you can venture to the deeper waters, particularly to steep drop offs and underwater canyons where catfish will converge.

That said, during the summer, fishing is best done at night, from just before sunset to just after sunrise, and this is best done in the shallows.

Night vs Daytime for Catfish

However, this does not mean that it is impossible to catch catfish during the day. During the daytime, you just have to find the holes, the underwater canyons, and the deeper parts of the water where catfish will converge and hide during the day.

Remember, catfish are opportunistic eaters, so if they seafood even during the daytime, they will go for it.

Seeing as catfish aren’t much more active when it is warm, it is fair to ask what the best water temperature is for catfish to bite.

Generally speaking, you want the water temperature to be around 70 degrees Fahrenheit, as this is generally how warm the water is during the late spring and early summer.

Catfish are usually the most active when the water is between 60 degrees and 80 degrees Fahrenheit.

The ideal water temperature to catch catfish is between 70 and 80 degrees Fahrenheit.

Will Catfish Bite in Cold Weather?

So, catfish will still bite in cold weather, but it is much more difficult to entice them.

Moreover, when it is cold, they will be in the deeper parts of the water, so it is up also much harder to find them.

The bottom line is that getting catfish to bite in cold weather is quite the challenge, although not 100% impossible.

Let’s go over some of the best tips that you can follow in order to help you catch more catfish.